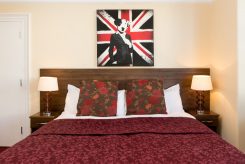 You wouldn’t think of castles and ruins when you think of our vibrant city, however Brighton and the surrounding coastal towns were instrumental in defending our shorelines in the days of old, to both foreign and domestic enemies. Always an amazing day out for all the family, a visit to a castle is heaped in history and great landscapes to casually peruse at your leisure. So here are my top choices to visit in East Sussex.

VISIT 1066 COUNTRY
One of the most famous of battles in England was the Battle of Hastings, where William Duke of Normandy invaded the British shores, fought the English and became King. During this time, the then King Harold II maintained and restored a selection of outposts to defend against the Norman attacks, and they can still be found today as remnants of the great battle. You can visit the site of the battle itself, located in the not so surprisingly named village of Battle, but what the real treat for me is seeing the castles and fortresses close up.

BODIUM CASTLE
This 14th Century moated castle, with a fully standing exterior and ruined interior, is an amazing day out. As you cross the fixed drawbridge, you can see and hear all about the defences of this magnificent building, from the hot tar being poured over invaders at the front double portcullises, to the clever raised mound entrance designed to give easy shot for bowman at the Normans trying to cross. With two of the four turrets still accessible to the public, you can head high aloft and look down over the surrounding landscape. Only a short walk away is the historic Kent & East Sussex Railway, still running a steam service for tourists daily.

LEWES CASTLE AND BARBICAN HOUSE MUSEUM
Nestled in the centre of Lewes, high on the hill top, this attraction is open year round and boasts splendid views from the Keep. Almost woven into the buildings of the town, nestled amongst cobbled stone pathways weaving up the hill is the Castle and the Barbican House Museum, located just next door, give an amazing look into life in the days of old, from the tools and clothes they wore, to how they defended the town from invaders. A must see and a great little town to wander around, with small independent shops selling all kinds of wares.

HERSTMONCEUX CASTLE
This spectacular moated castle is set in acres of beautiful parkland and Elizabethan gardens, which combines, as they state, ‘the history of medieval England with the romance of renaissance Europe’. Definitely the jewel of Sussex’s castles and residences, this impressive site is home to an array of wild flora and fauna, has resident geese and peacocks, and hosts a selection of open air performances throughout the year.

PEVENSEY CASTLE
One of England’s coastal defences, now mostly in ruin, Pevensey Castle, located just to the East of Eastbourne, was surrounded by a Roman Wall built in 290AD, most of which is still standing today, and when the Norman invaders came, they constructed the stone fort and keep. It has had a varied use over the centuries, up to the Second World War when machine gun posts were built into the medieval walls to protect the British shores once again. These can still be seen today and it is amazing to see how centuries of use have woven together to tell the story of England’s history. With Pevensey itself being such a picturesque little village, it is definitely worth a visit.

What's On in Brighton this February 2023. There's always plenty to do and see in Brighton, we have... more»

Things to do for Couples in Brighton

Brighton has always been a romantic city, and couples flood here year round to enjoy the wide... more»